During the activity, Academic Progress and Academic Excellence medals, among others, were awarded.

In the midst of its 45th anniversary celebration, Sagrado’s Student Support Program (PAE) recognized its outstanding students from the 2020-2021 academic year during a virtual activity hosted by Yizeth Arellano García and Eddie Nieves Burgos, both academic advisors of said program.

During this annual event, Sagrado’s president, Gilberto Marxuach Torrós, congratulated all the program’s participants, especially the 104 students who had outstanding achievements.

“PAE is a very special project in Sagrado. It serves more than 600 students annually, many of whom are first generation, some come from low-income families, and others are struggling with functional diversity. They are a very special group that receives great support and backing from the entire program team and staff.”

For Marxuach Torrós, PAE testifies to Sagrado’s mission of solidarity and, in turn, “demonstrates the potential that all young people have to achieve their goals, regardless of their background and their realities. Everyone can progress, excel, and achieve their dreams.”

For her part, PAE director Liz Sepúlveda Arroyo stressed that Sagrado was a pioneer in hosting the program in Puerto Rico and continues to set new standards. “It is also the first university on the Island to have the largest number of students under the program (618) and the third in the United States,” said Sepúlveda Arroyo.

In the activity, the awards for Academic Progress, Academic Excellence, Special Successful Student Award, and PAE Faculty of Excellence Award were given out.

Jeamy Meléndez Del Rosario, PAE coordinator, presented the Special Successful Student Award to Edwin Johnson Cardona. “Thanks to PAE for the opportunities it gave me for my academic development,” said the award-winning Dolphin, who is a student in the Social Work program.

Later, Professor Ana González Negrón was recognized. She has spent 26 years of her life teaching mathematics, and in PAE, she is described by her students as a professor who is “patient, committed, and an excellent human being”.

During her thank you message, González Negrón quoted philosopher and scientist Aristotle: “We are what we do every day”. On the matter, the professor, who is also industrial engineer, added that “excellence is not an act but a habit that develops little by little, with a lot of effort and sacrifice. It is what makes us good citizens and leads us to be productive in our society.”

The closing of the event featured Adeisha L. Williams Rodríguez, a Sagrado Student who belongs to the Institute of Musical Arts, performing the song Natural Woman, by Aretha Franklin.

After the virtual event, which was held in this modality due to the COVID-19 pandemic, there was a face-to-face ceremony at Sagrado’s Pórtico to hand out the medals to the students, following the strict health protocols implemented by the University.

Look at the photo gallery: 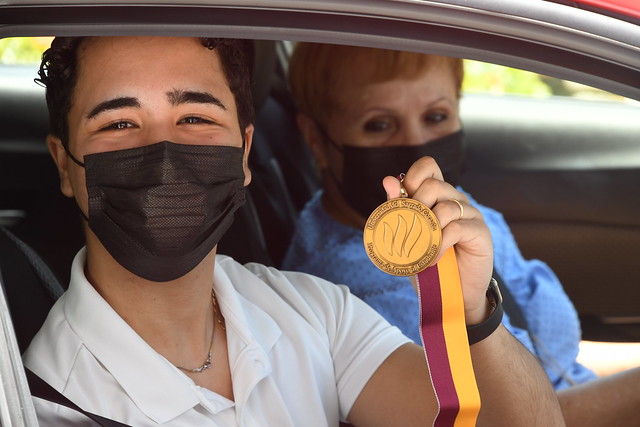